You are about to leave Excedrin.com.

Clicking on this link means that you have chosen to leave our website. While we believe that the website which you have selected to visit may be of interest to you, it is an independent web site which is not under our control. As a result, we do not endorse its content and we have no responsibility for its content or privacy practices.

If you do not wish to leave this site, click Cancel. 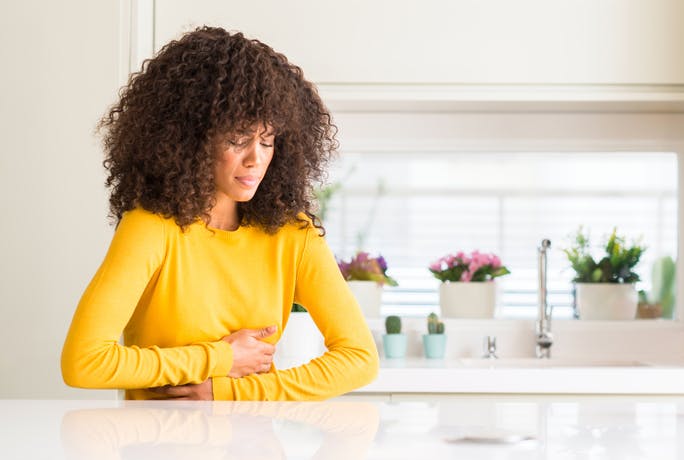 Exploring the Link Between Migraines and Nausea

A migraine is more than just a bad headache, it’s an extremely common neurological disease that affects approximately 10-12% of people worldwide and is responsible for a variety of symptoms.1,5 The most common of these is a pulsing headache that may appear on one side of your head and may be impacted by light, sound, and physical activity. A migraine may last for hours or even days and is frequently accompanied by some form of nausea or vomiting. Read on to learn about the connection between migraines and nausea.

How Do You Know if You Have a Migraine?

The American Migraine Foundation estimates that at least 39 million American live with migraines, but since so many go undiagnosed, the actual number may be much higher.2 There are a number of symptoms that may or may not present themselves during the course of the headache, and not every person will experience every symptom. This may make it difficult to know if you have a migraine.

Some common symptoms of a migraine include2:

Stages of a Migraine

A migraine attack has four distinct phases; being able to recognize and understand them may help those who suffer manage their condition. Symptoms of the earlier stages can serve as a warning sign, alerting a person to the need for medication that might lessen the effects of the migraine.

The first stage is known as a prodrome3, or “preheadache,” and marks the beginning of a migraine attack. Before the headache begins, individuals may feel irritable, depressed, and fatigued. They may have trouble concentrating and might find some difficulty while reading, speaking, and sleeping. During this stage, a person may also begin to feel nauseous. These symptoms may be difficult to pinpoint as being the precursor to a migraine because they may feel indicative of another issue in life like stress, feeling overworked, or eating something that isn’t sitting right.

The next stage is the aura stage, which is experienced by up to one-third of people who get migraines. It doesn’t occur during every migraine or for every person, but those who do experience it may endure blurred vision or may notice the appearance of flashing lights of blind spots.3

The headache phase of a migraine attack may last for hours or days. The specifics of the pain can vary from person to person and from attack to attack but is frequently characterized by pain on one side of the head that may gradually migrate to the other side of the head.3 This pain is frequently described as being “throbbing,” “drilling,” and like an “icepick in the head.”3 In addition to a headache, symptoms of this phase may include nausea and vomiting, as well as a sensitivity to light, sounds and smells.3

The final stage of a migraine is referred to as the postdrome and may also be called the “migraine hangover.”3 Like the predrome and aura, the final phase of a migraine attack may not be experienced by everyone who suffers from migraines. Even though the headache has subsided, the symptoms of the postdrome may still cause an individual to feel fatigued or dizzy though some people have reported a feeling of relief or euphoria.3

Understanding and recognizing these phases may help you to catch and treat your own migraines early so that their severity is lessened. Take the time to learn about your personal migraine triggers and pay attention to the warning signs of the prodrome phase to keep the attacks under control.

Nausea and vomiting are some of the most common symptoms of a migraine, affecting at least 60% of those who suffer.4 People may find these symptoms to actually be worse than the headache itself, because they are unable to take medication that may lessen the pain of the migraine without feeling sick to their stomachs. This inability to take medication may mean that the headache lasts longer and is more disruptive to everyday life thanks to the feeling of nausea.

Studies have indicated that 73% of patients with migraines also suffer from nausea and that for 29% of those patients, migraines made them throw up.4 Other studies have shown that migraine-related nausea occurred in more than 90% of patients and that throwing up was the result for almost 70% of those individuals.4

While many who suffer from migraines may experience nausea and vomiting, a definitive connection between the two has yet to be found, despite a number of studies.5 While a migraine may make you throw up, some individuals report that they actually found relief for their headache after vomiting.

One theory involves the vagus nerve, which is responsible for transmitting sensory information from the abdominal organs to the central nervous system and is a direct connection between the stomach and the brain. Dr. Rachel Colman, MD, a neurologist, headache specialist and Director of the Low Pressure Program at Mt. Sinai Hospital in New York believes that “vagal stimulation can lead to breaking of migraine, as there are medications categorized as vagal nerve simulators available that have been FDA-approved to treat a migraine attack.”6

Dr. Colman indicates that while throwing up may be a symptom of a migraine for many, it may mark the end of an attack for others. It isn’t fully understood why throwing up relieves migraines, but during an attack, the gastrointestinal tract may slow down or stop moving entirely in a process called gastroparesis. “As the migraine ends, the gut begins to move again and the vomiting is an accompanying feature of [it] ending, as the GI tract starts to work again. Or conversely, once the GI tract rids itself of the sensory stimuli, it aids in a feedback loop to stop the migraine” Dr. Colman reports.6

While there’s never a good time to experience a migraine attack, being aware of the phases and how they affect you as well as knowing your personal triggers may help. Being armed with this knowledge can allow you to stay ahead of symptoms like a sensitivity to light and sound or throwing up because of a migraine.

Another good idea if you frequently suffer from migraines is to prepare a survival kit full of comfort items and pain-fighters that’s easily stored or carried with you and can come in handy when you need it most. While there is no cure for migraines, talk to your doctor to determine the best course of action in treating your own symptoms.

Become a headache expert.
Sign up for the 5-week Headache Boot Camp