You are about to leave Excedrin.com.

Clicking on this link means that you have chosen to leave our website. While we believe that the website which you have selected to visit may be of interest to you, it is an independent web site which is not under our control. As a result, we do not endorse its content and we have no responsibility for its content or privacy practices.

If you do not wish to leave this site, click Cancel.

What Is a Migraine Headache? Causes, Symptoms, and Treatment

Learn about a few of the most common migraine subtypes.

Anyone who has suffered a migraine headache can tell you how much pain they can cause and how quickly it can ruin your day. But what exactly does ‘migraine headache’ mean?

A migraine headache is a painful and sometimes chronic headache that can come on quickly, often leading to severe pain around the temple area on one side of the head, which can also extend to the face, sinuses, jaw and neck.

Migraines can last anywhere from an hour to 72 hours. Migraine sufferers are often hit with bouts of nausea and/or vomiting during a migraine, and a sensitivity to light or sound is common. i

Other migraine symptoms that may occur either up to two days before, or during a migraine include: i,ii

According to recent statistics, about 12 percent of the U.S. population and roughly 14.7 percent of people worldwide suffer from migraines, usually between the ages of 15 (adolescence) and 55 (menopause). iii, iv In addition, migraines have a tendency to run in families. iii

Women are three times more likely to suffer migraines than men, which is largely driven by hormonal changes. iv More than half of migraines occur right before, during, or after a woman has her period. Why this happens is still unclear, but experts think that the drop in the hormone estrogen just before your period may trigger a menstrual migraine. v Stress is another common migraine trigger.

It is important to know what type of migraine you have because management can vary for different migraine types. Here are a few of the most common types of migraine:

Migraines without aura are the most common type of migraines, experienced by 70 to 90 percent of migraines sufferers. They begin with pain and no advance warning.

Episodes of migraine without aura can last between four and up to 72 hours. The headache is usually felt on one side of the head with a throbbing or pulsating pain which can affect daily life. 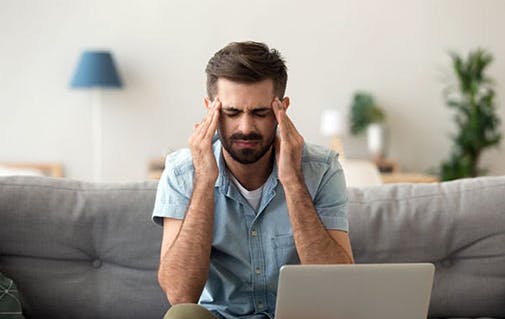 Some migraine sufferers will notice visual warning signs including dizziness, blind spots in one or both eyes, prickling skin sensations, zigzag patterns in your vision or flashing lights, 10-15 minutes just before their headache strikes. This is what’s called “migraine with aura,” which account for about 10 to 30 percent of all migraine sufferers.

Retinal migraines – or ocular migraines – are much rarer than migraines with aura. They are called retinal migraines because the common symptom is vision loss or blindness in one eye for as long as an hour either leading up to, or during, the headache. Proper diagnosis and treatment of retinal migraines is imperative. See your doctor right away if you think you might be experiencing one.

What is Chronic Migraine? ix

If you experience more than 15 headaches per month over a three month period, you may be suffering from chronic migraine. These migraines can be completely debilitating and are different to those of episodic migraines, which usually last for just a few hours. If you think you may be suffering with chronic migraine, it’s a good idea to keep a migraine diary so you and your doctor can track how many days per month you experience your symptoms.

Want to learn more about migraines? Discover the most common causes of migraines so you know what to look out for, treatment options available and how to prevent migraines in future.

Manage your migraines a
little easier with our 5-week
Migraine Survival Guide.